For the Dubuque County Historical Society and the National Mississippi River Museum, a member of the Smithsonian Institution Affiliations Program

Members of the Dubuque County Historical Society and curators at the National Mississippi River Museum approached me with a unique challenge. They sought the creation of a facial reconstruction based on the skull of Julien Dubuque, founder of the city of Dubuque, Iowa. Dubuque was a French Canadian fur trapper and friend to the Mesquakie Indians. Upon his death in 1810, he was buried on a high bluff overlooking the Mississippi River. In the late 1800s, the original log mausoleum was replaced by a limestone tower and monument at the same site. At that time, excellent photographs were made of Dubuque’s skull prior to reburial. Though Dubuque’s actual skull now lies buried under many feet of concrete, I was able to use the photographs, along with historic and anthropological inputs to create a reasonable depiction of his appearance in life.

The quality of the early skull photographs was very good and there were multiple available views. The complication arose due to a lack of scale or ruler in the images. This meant that although the craniofacial forms were visible, the size of the skull in life was not known.

The primary image that previously existed of Dubuque depicted him as a sort of frontiersman in a coon skin cap. Many historians disagreed with this portrayal since written records indicated a different type of individual. He was known to be a well-educated, polite and cultured man who lived like an upper class gentleman even while with the Native Americans. Documented to have played the violin at social gatherings, his cabin had china and furniture from St. Louis and a library of 58 books. 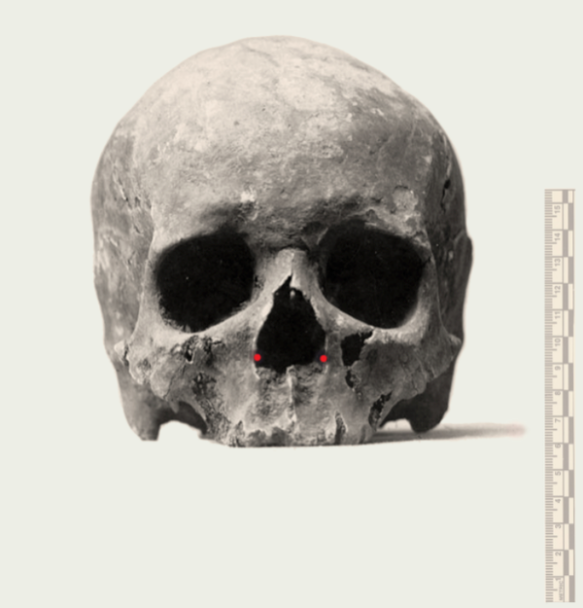 This forensic facial reconstruction challenge was part art and part science. Starting with the 1887 skull photos, the first step needed was to convert the photographs to life-size, so I decided to try a technique that had not previously been attempted. I consulted with anthropologist friend Dr. Kate Spradley from the Forensic Anthropology Center at Texas State University, who supplied important data in the form of measurements. I knew that Dr. Spradley had measured multiple skeletons of males of French origin from the 18th Century from the Spitalfields Collections at Duckworth Laboratory in Cambridge, England. It occurred to me that I could scale the frontal Dubuque skull photo based on those measurements.

So, Dr. Spradley’s measurements were used as a scale to create life-size skull photos for each of the views. Red dots marked the width of the nasal aperture or nose opening. I enlarged the frontal skull photo so that the distance between the red dots was 25 millimeters which was the average bony nasal width based on the averages for white French males from a population living at about the time of Julien Dubuque. The multiple skull views were correlated and scaled using the nasal aperture as a foundation. Since the various formulas in forensic facial reconstruction require life-size work, the process could then begin. 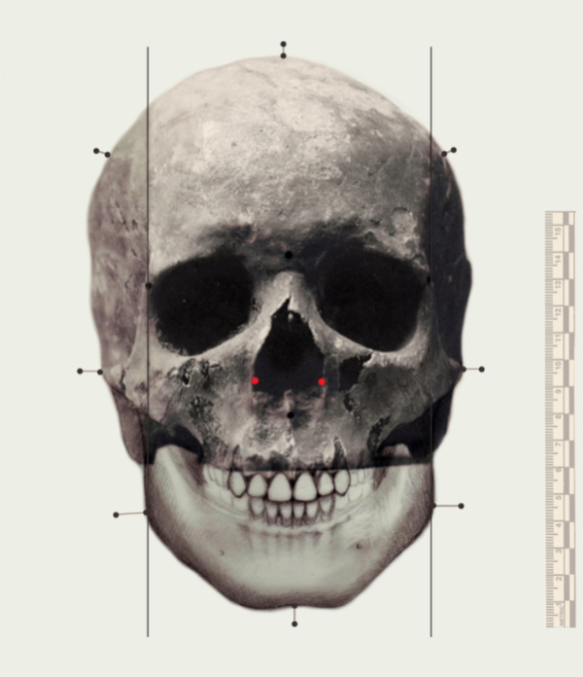 The next step was to create an approximation of the missing mandible. For this, a formula from the field of orthodontics was used to sketch out the general structure for the jaw to correspond to the cranial measurements. The teeth were blocked in to relate to the fossas or sockets where the upper teeth would have been. Next, small dots were added at bony landmarks around the skull to show average tissue depths based on anthropological studies for white males.

Formulas from the field of forensic facial reconstruction helped determine the eyes, nose and mouth. The facial contours were developed by “connecting the dots” around the average tissue depths and the forms and features of the face were refined according to the bony architecture.  In addition, I always observe and study the various hypertrophic indicators on the bone that give clues about the relative robustness of the muscles in life.

Written descriptions of Julien Dubuque from the time at which he lived were the basis for the hair, eye and skin color. Clothing details reflect styles for gentlemen of this era.  Based on my experience drawing thousands of faces as a police composite artist, it is a matter of routine to develop details based on descriptions in words alone. 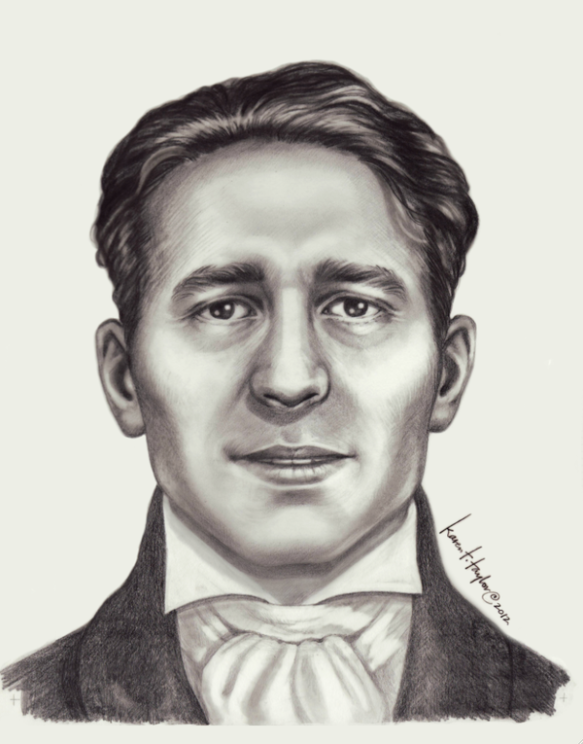 So, the finished reconstruction is an artistic interpretation based on a lot of scientific and historical input to give the best representation possible of the face of Julien Dubuque. This  exhibit can be seen at the National Historic Landmark Site, the Old Jail Museum in Dubuque, Iowa.

A tinted version of my reconstruction was done by Lisa Sheppard at Dreamfly Creations.

© All images and text are exclusive property of Karen T. Taylor (unless otherwise indicated). No part of this website or any of its contents may be copied, reproduced, disseminated, published, altered or adapted in any way without the prior written consent of Karen T. Taylor.
Loading Comments...